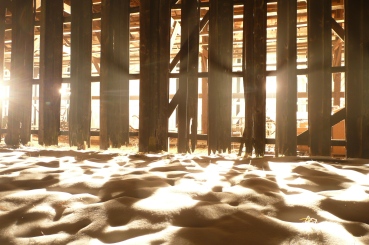 Shedding Light is a celebration of local agricultural vernacular – transforming an aging tobacco shed on a small family farm into an architectural lantern during the months of December 2009 and 2010.

As an architectural designer, I’m always very interested in the landscape and the vernacular of regional buildings. So when I moved to western Massachusetts a few years ago and discovered the tobacco sheds for the first time, I was immediately struck by their unique form and inherent beauty. Learning that farming in general (but cigar tobacco farming in particular) is an important and unique aspect of the region’s history, and that it’s a dying practice has made it that much more interesting for me to explore.

This project occurs at the intersection of architecture, agriculture and sustainability; simultaneously considering history and looking to the future.  As with much of my work, the idea was to call attention to the environment (both built and unbuilt) and create a forum for the questions that arise as a result of the work. In this case Shedding Light called attention to the role of public art in the community, the form of the barn, to the special quality of the tobacco that’s grown here, and to the disappearance of the family farmer for all the various reasons. Many observers simply ‘saw’ the shed and fields for the first time – re-contextualized as art in a landscape so often taken for granted as they passed on the highway.  And while light has been used in very literal ways to illuminate both objects and issues; with Shedding Light, illumination itself became the object of attention. What meaning does light have in darkness and what does it illuminate for each of us?  What is the power of art to connect us to our landscapes, both cultural and physical?

A documentary film highlighting the development of the project, partnerships and personal connections that were made during the process and an exhibit of photographs taken by various artists of the installation were also produced.

Thanks especially to Joe and Sarah Swartz of Swartz Family Farm for offering their tobacco shed and to Terry Rooney for helping to pave the way for the project to happen.  Thanks also to the Town of Amherst, Theatrix Lighting and Design, Dr. David Damery of UMass, Amherst Media and the Nacul Center Gallery. 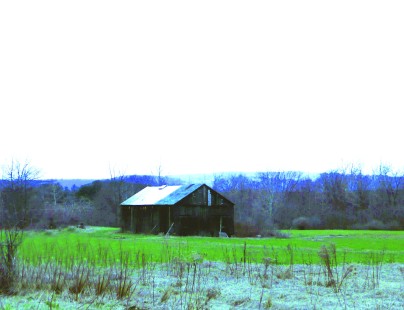